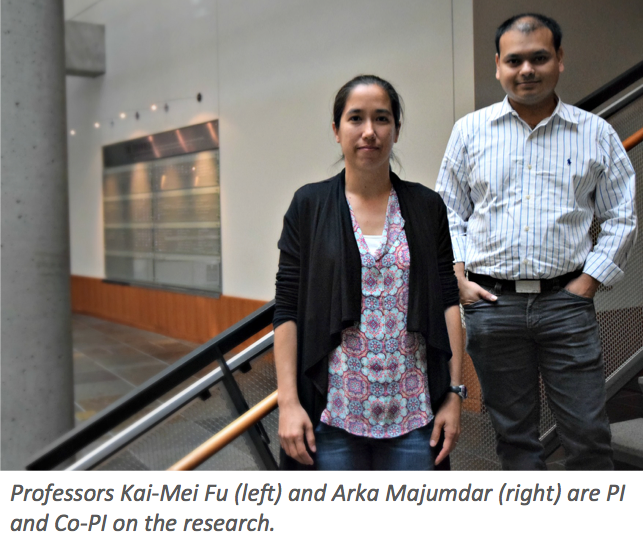 Electrical Engineering and Physics Assistant Professors Kai-Mei Fu and Arka Majumdar received a four-year, $2 million Emerging Frontiers in Research and Innovation (EFRI) grant from the National Science Foundation (NSF) for their project entitled: "A semiconductor-diamond nanophotonic transmitter for long-distance quantum communication.” This highly-competitive grant was awarded to Fu and Majumdar to support their upcoming work on fundamentally-secure communications, which exploits the principles of quantum mechanics.

Fu, who is the principal investigator on the project, and Majumdar will work alongside Professor Maiken Mikkelsen at Duke University and Professor Alejandro Rodriguez at Princeton University. The team formed in response to a call by the NSF for practical quantum-secure communication.

In the mid-1980s, it was proven that quantum mechanics allows unconditionally secure communication, since it is impossible to gain information about a quantum system without changing the information. Secure communication is essential in today’s online world as well as for issues of national security.

However, long distance communication was not seen as even theoretically possible until more than a decade later due to the no-cloning property (it is impossible to identically copy quantum information without full prior knowledge of the information).

The no-cloning property prevents quantum signal amplification, which is essential to transport a signal over long distances. This barrier was dismantled with the realization that quantum information can be teleported using a device called a quantum repeater.

“It’s just like Star Trek, but with information” Professor Fu said. “We can’t amplify our quantum signal like we do today in fiber-optic cables, but what we can do is destroy the information at one network node and have it appear at another.”

However, significant roadblocks exist for this theoretical concept to become a practical reality. The existing systems work at low temperature and are physically bulky, expensive and not scalable over large distances. Professor Fu and her team tackle these challenges by proposing two transformative approaches.

First, they introduce a fully integrated platform, which combines plasmonics (the interaction between an electromagnetic field and free electrons in a metal), semiconductor optoelectronics (the interaction of photons with semiconductor materials), and diamond-based quantum light emitters to increase the operating temperature to ambient temperature.

Second, they will build a novel frequency conversion block to interface the quantum devices with the existing telecommunication infrastructure. These devices will be designed by state-of-the-art computational techniques, which have only been recently tractable with today’s resources.

Reaching a deployable quantum repeater technology will take several years to achieve, even if Fu and her team are successful. However, the marriage of physics and engineering is the perfect pair needed to tackle the initial challenges of scalability.

“We want to discover how we can get this secure method into a semiconductor platform [on a chip] and make it practical,” said Professor Fu. “If it becomes practical, then we can focus on making it scalable over large distances to enable a global secure network.”