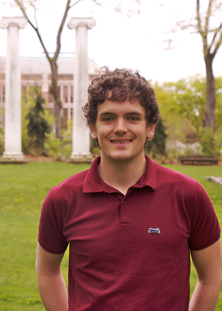 The Barry M. Goldwater Scholarship and Excellence in Education Program was created in 1986 to honor Senator Barry M. Goldwater, who served our country through various governmental roles for over a half century. Its purpose is to provide a continuing source of highly qualified scientists, mathematicians, and engineers by awarding scholarships to college students who intend to pursue careers in these fields.

Sam Burden is advised by Professor Eric Klavins, and has worked in Klavins’ lab since his freshman year.

Sam is the latest EE student to do well in the Goldwater competition. Last year Mei Liu also received an honorable mention. In 2005, Jason Parker won a Goldwater Scholarship.