"From Radiative Transfer Theory to Fast Algorithms for Cell Phones" 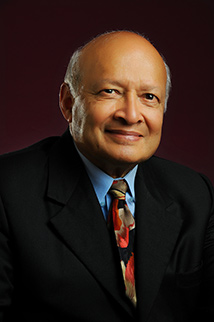 Thomas Kailath (Sc.D., MIT, 1961) has been at Stanford University since 1963 and currently holds the title of Hitachi America Professor of Engineering, Emeritus. His research has ranged over several fields of engineering and mathematics, including information theory, communications, linear systems, estimation and control, signal processing, semiconductor manufacturing, probability and statistics, matrix and operator theory. He has also co-founded and served as a director of several high-technology companies. In these efforts he has been aided by a stellar array of around a hundred doctoral and postdoctoral scholars. Major honors include the Shannon Award of the IEEE Information Theory Society; the Education and Signal Processing Medals of the IEEE as well as its Medal of Honor; Guggenheim, Churchill and Humboldt Fellowships; honorary degrees from Sweden, Scotland, Spain, France and India; and election to the US National Academy of Engineering, the US National Academy of Sciences, the American Academy of Arts and Sciences, the Royal Spanish Academy of Engineering, the Indian National Academy of Engineering, the National Academy of Sciences, India, and the Silicon Valley Engineering Hall of Fame. His latest major honors are the Padma Bhushan, India’s third highest civilian award presented by the President of India in April 2009; Foreign Membership of the Royal Society (London) in July 2009; the Blaise Pascal Medal of the European Academy of Sciences in November 2009 and the BBVA Frontiers of Knowledge award in Information and Communication Technologies in June 2010.