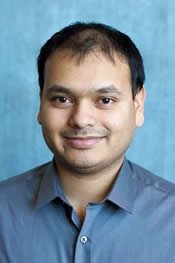 Congratulations to Assistant Professor Arka Majumdar, who was awarded an Air Force Office of Scientific Research (AFOSR) Young Investigator Research Program grant. One of 57 researchers selected from more than 200 proposals, Majumdar will receive $120,000 per year for three years to investigate a hybrid silicon/silica photonics platform for low-power digital optoelectronic switching and logic devices.

Majumdar’s research will focus on developing low power, scalable optically bistable devices for optoelectronic computing. Optical computing has been a long-standing goal for physicists, but the large size and power consumption of the switching devices have previously limited their utility. With current sophisticated fabrication technology and newly discovered nonlinear and electro-optic materials, both issues can be addressed to realize practical optical computing devices. The proposed photonic platform will be based on silicon or silica to take advantage of the matured CMOS fabrication technology. The optical power reduction (up to ~100's of photons) will be achieved via material innovation, new cavity design and novel photonic device topology. The required optical power will be lowered both by using the strong nonlinearity as well as due to the cavity enhancement. Advancing beyond a single device, Majumdar plans to build an optical computing system with the devices. Although developed primarily for optical computing, the technology will have applications in optical sensing, tunable photonics and optical quantum information science. Majumdar’s research will involve Assistant Professor Xiaodong Xu from the UW Department of Physics.

Majumdar joined UW as an Assistant Professor in EE and Physics in Fall 2014. Previously he was a Postdoctoral Research Scientist at the Intel Labs in Santa Clara, CA, where he worked on optical sensors, next generation modulators, and took part in Intel's technology strategic long-range plan, 2014. He completed his B. Tech from Indian Institute of Technology, Kharagpur in 2007, and Ph.D. (EE) from Stanford University in 2012. He then spent one year at University of California, Berkley as a Postdoctoral Fellow. His research interests include devices in nanophotonics, nanometallics and quantum optoelectronics with a goal to explore the fundamentals and applications of photonics in information processing. Majumdar has published more than 40 scientific papers in distinguished journals, which have been cited more than 900 times. He is a recipient of the Gold Medal from the President of India among other accolades.