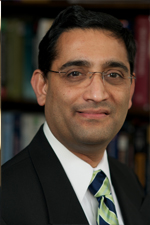 Suresh Subramaniam, who received his Ph.D. from UW EE, was elevated to the grade of IEEE Fellow, Class of 2015. He is honored for his contributions to optical network architectures, algorithms and performance modeling.

Subramaniam is currently Professor and Interim Chair of the Department of Electrical and Computer Engineering at George Washington University. His research interests are in the general area of communication networks, specifically the modeling and analysis of networks and network architectures and algorithms. Current topics of interest include optical networks, cloud computing and datacenter networks. His work has been funded by several agencies including NSF, DARPA and NSA.

Subramaniam joined George Washington University in 1997 after completing his Ph.D. from UW EE that same year. His dissertation was titled "All-optical networks with sparse wavelength conversion" and was directed by former EE faculty member Arun Somani, now Associate Dean for Research at the College of Engineering, Iowa State University.

The title of IEEE Fellow is bestowed by the Board of Directors to professionals who have made remarkable contributions in their field. The number of fellows selected each year is less than 0.1% of the total voting membership of the organization.