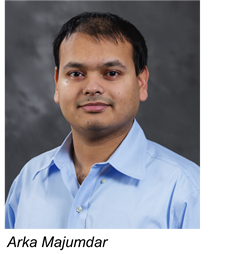 Assistant Professor Arka Majumdar, who has a dual appointment in the Electrical Engineering and Physics Departments, has been honored with a 2015 Intel Early Career Award. The award recognizes faculty members who show great promise as upcoming leaders in disruptive computing technologies, which are innovations that displace earlier technologies in ways the market does not anticipate. In addition to financial support, Arka will have the opportunity to collaborate with senior technical leaders at Intel.

The award supports Arka’s research on optical sensing using silicon photonics, which has the potential to reshape the future of image sensors by integrating optical computing with the sensors. In his research, Arka is using the devices generally used for optical interconnects to build image sensors, which collect only relevant information from the scene without capturing all the data. Such an intelligent sensor will be energy efficient and compact, two critical requirements for sensors to support the infrastructure of the Internet of Things.

Earlier this year, Arka received the Young Investigator Award from the Air Force Office of Scientific Research. Prior to joining UW EE in 2014, Arka spent a year at Intel Labs in Santa Clara, Calif., working on next generation electro-optic modulators and optical sensors.