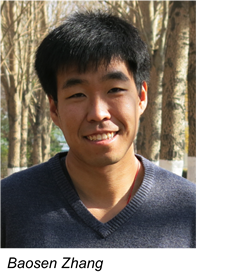 UW EE Assistant Professor Baosen Zhang has received a National Science Foundation grant to investigate the relationship between people and the power grid, with the goal of making power systems more responsive to users’ complex and evolving needs. Leading the research effort, Zhang will work in collaboration with Ramesh Johari at Stanford University.

In recent years, the relationship between people and the power grid has grown more complex, due to new technologies that impact how people interact with the power grid, such as smart appliances. This has resulted in less than optimal power system performance, as power grids operate on a traditional model that doesn’t take into account the dynamic needs of users.

In his research, Zhang will develop a new framework for interactions between the power grid and users, enabling user preferences to be learned over time as actions are repeated, such as what time of day someone tends to do laundry.

Zhang joined the EE Department in Spring 2015. He was named to Forbes' 30-Under-30 list for his work in the energy industry in January 2015. Zhang received his Ph.D. at the University of California, Berkeley.