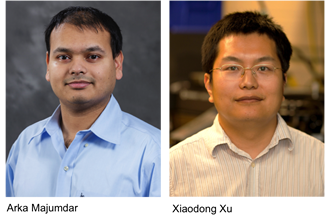 Assistant Professor Arka Majumdar, who joined the Electrical Engineering and Physics Departments in 2014, together with Affiliate Associate Professor Xiaodong Xu, have created a new type of ultra-low threshold laser. With extremely small dimensions, the nanoscale laser may shape the future of information transfer in the next generation of computing systems and also has practical applications to sensing, imaging and spectroscopy.

Previously, nanolasers were designed with materials not fully compatible with integrated circuits. To overcome this problem, Majumdar and Xu designed a new type of nanolaser using the thinnest possible semiconductors: two-dimensional sheets consisting of three atomic layers. The 2D material emits light efficiently, making it ideal for use in lasers. Describing the development in detail, the research paper was recently released in the international journal, Nature.

With a trend toward increased cloud computing and large data centers, the nanoscale laser has practical applications in high-performance computing. By using light to transfer data between different components of a computer, rather than electricity, information may be transferred more quickly and with less energy.

Electricity generates heat, is slower and requires more energy than light. Overcoming compatibility issues with existing technologies, the nanoscale laser is also capable of converting an electronic signal into an optical signal and delivering it through an optical path. The project, supported by the National Science Foundation and Air Force Office of Scientific Research, also involves Jelena Vuckovic from Stanford University.