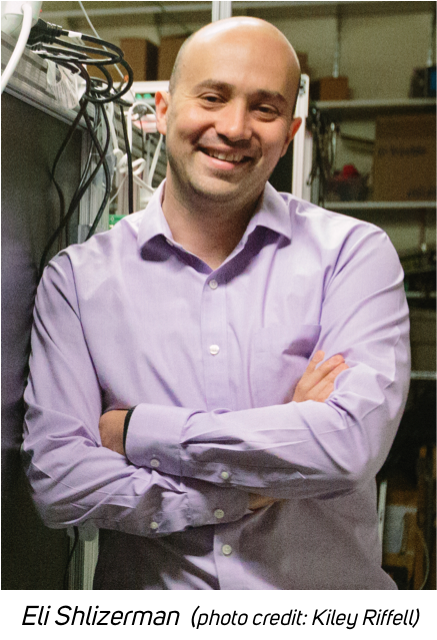 Assistant Professor Eli Shlizerman, who joined the UW Department of Applied Mathematics three years ago, will assume a joint tenure-track appointment in Electrical Engineering starting this fall. An expert in novel data analysis methods, Shlizerman is also appointed as a Washington Research Foundation Professor and will work closely with the eScience Institute.

Born in St. Petersburg, Russia, Shlizerman moved with his family to Tel Aviv, Israel, where he earned his Master’s and Ph.D. degrees at the Weizmann Institute of Science. Following an internship at Columbia University and postdoctoral research at Princeton University and UW, he joined UW as Assistant Professor of Applied Mathematics in 2012. Shlizerman decided to join UW EE due to the department’s strengths in signal processing, networks, smart devices and biorobotics, which all relate to his research.

“I am looking forward to collaborating with EE faculty in networks, signal processing and biorobotics to create bio-inspired devices that mimic and implement the networks that I study,” Shlizerman said.

Shlizerman’s research focuses on analyzing complex dynamic networks, such as the nervous system. Typically, such networks are extremely challenging to study because of their complex structure and intricate time-dependent dynamics. To overcome these challenges, Shlizerman developed analysis methods that fuse data analysis with dynamical system theory, which uses various equations to determine the behavior of complex systems.

Particularly interested in applying his analysis methods to insects’ sensory systems, Shlizerman is currently researching the olfactory system in moths, the nervous system in the C. elegans worm and sun-compass navigation in Monarch butterflies.

Shlizerman’s research has resulted in answers to longstanding questions. His analysis of the olfactory system in moths led to the development of a prototype of the antennal lobe, which is the primary olfactory processing unit in insects. His research group’s work in collaboration with UW biology was published in Science in 2014 and Shlizerman was honored with a joint NSF-NIGMS Award and a Boeing Award for outstanding research.