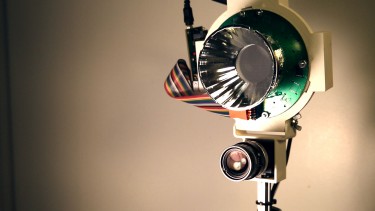 A new low-cost camera that captures unseen details beneath surfaces has been developed by researchers in the UbiComp Lab. Led by EE & CSE Professor Shwetak Patel, the camera, called HyperCam, uses infrared as well as visible light to capture details that can’t be seen with the naked eye.

The technology may pave the way for a more consumer-friendly version of hyperspectral cameras. While similar cameras used for industrial purposes cost several thousands of dollars, researchers estimate that HyperCam costs between $50-$800, the lower end covering the cost of adding it to a mobile phone camera.

The researchers also developed intelligent software to pinpoint differences between what a person can see and what the camera can capture. For example, the hyperspectral camera captures skin and vein patterns that are more detailed than what the human eye is capable of seeing. The research was presented in a paper at the UbiComp conference last month.