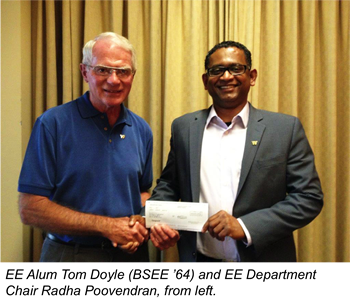 “I’ve established the endowment in gratitude for scholarship assistance I received while pursuing a bachelor’s degree in EE at the University of Washington, and for the fulfilling career opportunities such an education can provide,” said Doyle.

Born in Seattle, Doyle was drawn to the challenge of mathematics while in high school and was curious about radio and television technologies. The combination of interests led him to pursue the field of electrical engineering. During college, scholarship awards covered tuition and a part-time position with the Boeing Company helped cover expenses and provided valuable work experience.

After graduating with his bachelor’s degree from UW, Doyle attended graduate school at Stanford University with the help of a National Science Foundation Fellowship. After receiving his MSEE degree in 1965, he worked at Bell Laboratories in New Jersey, pursuing a career in systems engineering and network planning. In 1984, Doyle transferred to Bell Communications Research, a new company supporting the divested local telephone companies.

While at Bell Labs, Doyle was actively involved in translating market needs into requirements on the development of local digital switching systems, including customer service features such as caller ID, call waiting and speed dialing. At Bell Communications Research, he continued his work on digital switching services requirements and became more directly involved in consulting with local telephone company personnel on network modernization strategies and economics.

Doyle retired in 1992 and returned to Seattle. He enjoys golfing and has traveled to more than 50 countries.