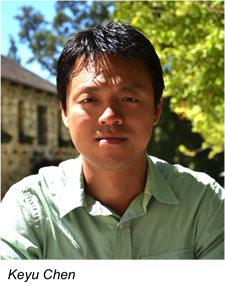 The future of virtual reality may be at our fingertips, or EE Ph.D. candidate Keyu Chen’s fingertips, to be exact. Together with Oculus Research, Chen is developing a device that uses electromagnets to track the position of each finger in 3D.

Chen began working on the project during an internship with Oculus Research, located in Redmond, Washington. Oculus is currently developing a virtual reality device, the Oculus Rift, which consists of a head-mounted display. In theory, the finger-tracking device, called Finexus, would be used with the head-mounted display to track finger movements.

Finexus operates by leveraging magnetic-field sensing. Electromagnets, a type of magnet where an electric current produces a magnetic field, are placed on fingertips. Using only four magnetic sensors, fingertip motions are tracked within 1.3 mm accuracy. Unlike other similar systems that use cameras to track fingers, or specific body parts, Finexus does not rely on a direct line of sight between sensors and electromagnets, enabling a greater range of movement.

“I can see the system being used with a virtual reality headset for actions that require delicate motions such as playing a piano, typing a keyboard or using a remote controller in the virtual space,” Chen said. 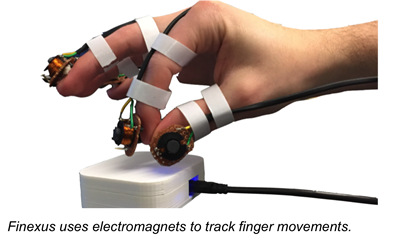 Next steps are to continue to refine the hardware, specifically using new magnetometers with higher sensitivity and shrinking the size of the sensor board and electromagnets. The ultimate goal is to convert the whole system into a battery powered wearable device for tracking delicate finger motions, Chen said. Chen is advised by EE and CSE professor Shwetak Patel.