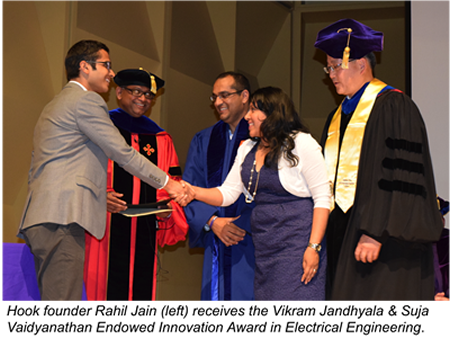 For graduate student Rahil Jain, the idea for his company, Hook, came about from trying to save a few dollars when converting his existing home devices to smart gadgets.

“I like tech and I am a cheapskate!” Jain said. “I wanted to automate my apartment without spending hundreds of dollars.”

Jain’s idea and entrepreneurial spirit are, quite literally, starting to pay off. In addition to winning several business plan competitions this year, Jain is the first recipient of a newly created award that supports students with an entrepreneurial spirit, the Vikram Jandhyala and Suja Vaidyanathan Endowed Innovation Award in Electrical Engineering.

The award was founded by former EE department chair and professor Vikram Jandhyala, who is the UW Vice Provost for Innovation and Executive Director of CoMotion, UW’s collaborative innovation and technology transfer hub, and his wife, Suja Vaidyanathan, an EE alum (BSEE ’97).

The award was presented to Jain at the 2015 Electrical Engineering Graduation Ceremony. Jain, who still has two years left of his graduate studies, said the award funding will be used for a team building activity for the four-member Hook team. 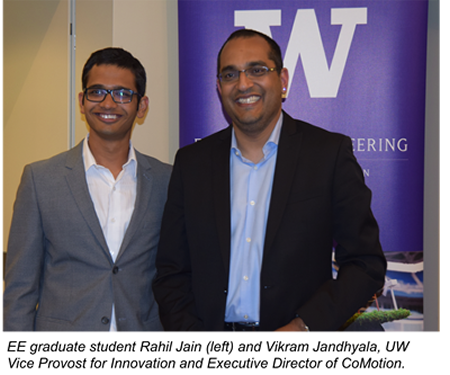 “We hope to come up with new ideas to advance the Hook vision of making existing dumb devices smart,” Jain said.

Offering home automation on a budget, Hook allows customers to convert existing home devices to smart gadgets, which decreases energy consumption. Following the first prototype in 2014, the company has continued to gain recognition. Hook was the first runner up in the UW Environmental Innovation Challenge in April 2015, receiving $10,000, and the second runner up in the UW Business Plan Competition in May 2015, receiving $7,520. A successful Kickstarter campaign raised $35,167 in pre-orders and the team is on track for the first batch of Hooks to be delivered in December 2015.

The idea for founding the award came from Jandhyala’s own entrepreneurial background. After earning his Ph.D., Jandhyala worked for a startup company (Ansoft, acquired by Ansys) for several years prior to joining UW. In 2006, Jandhyala and his students founded a simulation software company, Nimbic (acquired by Mentor Graphics in 2014), based on federally funded research, which has since been acquired. Jandhyala’s wife, Suja, is also entrepreneurially minded. After graduating from UW EE, she worked for several years at Intel before getting an MBA from the Harvard Business School and working at Madrona Venture Group and Microsoft.

“We felt this was the right time to do something focused and meaningful for students,” Jandhyala said.

With many UW start-ups originating in EE, Jandhyala hopes the award will inspire students to become a more integral part of the process. Open to both undergraduate and graduate students, the award is not limited to startup companies, but is open to students working toward real-world innovation and impact in any field: social, environmental, healthcare, policy and tech, to name a few.

“Many start-ups from UW are faculty driven and my hope is that we can make them more student driven as well and drive a cultural shift,” Jandhyala said. “This fits in well with the UW’s Innovation Imperative, which includes CoMotion, the new Global Innovation Exchange, Urban@UW and Startup Hall.”