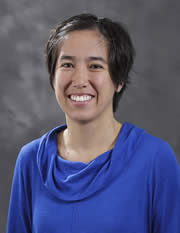 Assistant Professor Kai-Mei Fu has been honored with a Cottrell Scholar Award (CSA), which funds early career faculty who excel in both undergraduate teaching and research. Fifteen awards were granted, totaling more than $1.1 million.

By emphasizing the importance of faculty who value both teaching and research, the CSA program’s objective is to increase the number of undergraduates who study science and pursue advanced degrees, paving the way for the next generation of scientists and researchers.

As director of the Optical Spintronics and Sensing Lab, Fu’s research focuses on identifying and controlling the quantum properties of point defects in crystals, which has potential applications to both information and sensing technologies. Her teaching responsibilities include large introductory pre-engineering courses, graduate-level quantum technology courses, and one-on-one mentoring of undergraduate and graduate researchers in her laboratory. She is also the founder of an outreach program for Seattle elementary school children called UW Science Explorers.

After receiving her Ph.D. in 2007 from Stanford University, Fu worked in HP Labs as a Postdoctoral Associate. She joined UW EE in 2011 with a dual appointment in the Physics Department. Fu holds 12 patents and has been published more than 34 times in scientific journals.