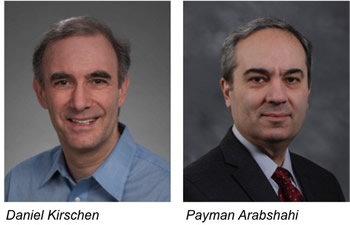 Natural disasters such as hurricanes, earthquakes and floods impact power systems, as demonstrated by events such as Hurricane Sandy in 2012. The resulting power outages can last up to weeks, causing hardship for many people.

To address this problem, EE Professors Daniel Kirschen (lead PI) and Payman Arabshahi (co-PI) have received a three-year $349,000 grant from the National Science Foundation to improve the resilience of electricity grids.

Unlike the work recently undertaken by utility companies, which aims to improve electricity grids by improving individual components that failed during past disasters, Kirschen, Arabshahi and Ph.D. student Yushi Tan will consider the resilience of the system as a whole. To do so, they will develop algorithms to quantify the condition of power systems.

“We know that natural disasters damage a lot of equipment, but we don’t know which ones,” Kirschen said. “The challenge is to determine which ones need to be reinforced to minimize the pain that these disasters inflict on the communities.”

The project aims to develop tools that can be utilized by electric utilities to fortify their systems, including the ability to assess the scope of upgrades and projected costs. The research will also allow for better disaster recovery, by allowing emergency responders to evaluate and study the relationship between the electricity grid and other critical infrastructures.

The project will be undertaken in collaboration with Snohomish County PUD.