New technology developed by EE and CSE students in the UbiComp Lab, called MagnifiSense, is able to sense appliance usage and even indicates who in a household uses particular devices. 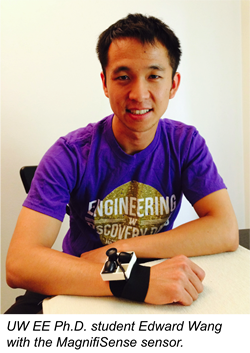 “By tracking the devices each individual is using, it becomes feasible to imagine individual breakdown of carbon footprint,” Wang said.

The technology, which consists of a sensor worn on the wrist, is able to sense appliances using electromagnetic radiation emanating from devices, including refrigerators, blenders and even vehicles. Unlike other technologies that track energy usage for specific technologies, MagnifiSense is able to identify which person in a household uses specific appliances, enabling a person’s carbon footprint to be tracked. The system may also lead to persuasive technologies, incentivizing people to make eco-friendly decisions, such as taking the bus rather than driving to the grocery store. There is also the opportunity for device personalization. For example, if someone with Alzheimer’s turns on a stove, extra safeguards already in place could be prompted.

“Our system is particularly innovative since we can sense both what you do at home and what you do outside of your home,” Wang said. “Most systems focus on sensing indoors as the outdoor environment is not only hard to instrument, but also very noisy.”

The next step in the team’s research is to explore making the system practical for real-world deployment, which entails miniaturizing the sensor or utilizing sensors in other technology, such as smartphones. The team also plans to look into the potential to identify the operational state of appliances from signals that are received.

The research was presented this week at the UbiComp 2015 conference in Osaka, Japan.