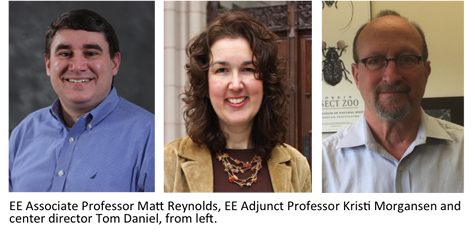 When it comes to developing better flight systems, UW researchers are consulting with the true experts in the field: winged animals.

The new Air Force Center of Excellence on Nature-Inspired Flight Technologies and Ideas, located on the UW Campus, is dedicated to the exploration of how nature can inform the development of remotely operated small aircraft. One of six centers in the nation funded by the U.S. Air Force, the UW center is the only one with this focus area. 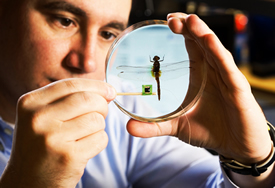 EE Associate Professor Matt Reynolds is one of several faculty leaders from various departments involved in the center. The new research center allows Reynolds to build on his work with neural and EMG telemetry from flying dragonflies. Reynolds previously oversaw the development of a wireless telemetry system used to collect and study information about the neurological activity of dragonflies. Battery free, the system beams power to a small device positioned on the underside of a dragonfly, light enough to not impact flight. The wireless system works within a specified flight space designed to replicate a dragonfly’s natural habitat, complete with a pond and fruit flies.

Reynolds is now working closely with center lead Tom Daniel and EE Adjunct Professor Kristi Morgansen. He is collaborating with the Daniel Lab to extend the capability from neural and EMG telemetry to include sensory data from insects such as moth sensilla. Connected to sensory neurons, sensilla are sense organs in insects. The sensory data is expected to enable detection and tracking of minute concentrations of airborne substances, such as human-exhaled carbon dioxide and pheromones. The research will inform the development of future flight systems, especially miniature aircraft that may be used in remote or hazardous areas.

“My involvement is focused on integrating biological with silicon sensing and computational capabilities in future flight systems, such as micro air vehicles,” Reynolds said.