New Book on Performance, Control and Security of
Networked Systems Authored by Faculty and Alums 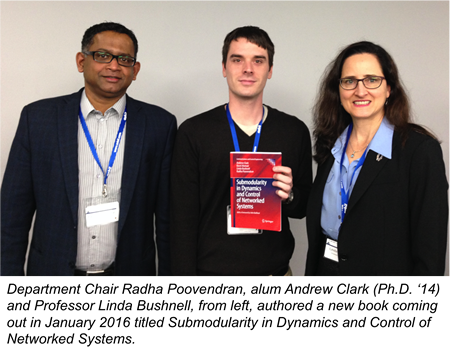 The book presents a framework for optimal control of networked systems, which play important roles in government, commercial and consumer applications including energy, transportation, medical and communication systems. In order to enhance the performance of systems and increase security from malicious attacks, the authors propose a new framework for controlling networked systems, which entails designating a subset of input nodes that are controlled directly and are capable of guiding remaining nodes. In all applications, system performance is determined by the choice of nodes that act as inputs, which have provable performance guarantees.

This work is the first to apply submodular optimization, where adding an element to an input set has less impact as the size of the set increases, to the control of networked systems. Applications include maintaining stability in power grids, steering gene regulatory networks from unhealthy to healthy states, influencing opinion dynamics in social networks and controlling unmanned vehicles.