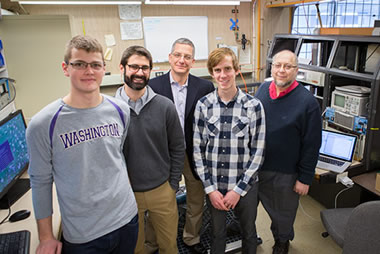 Constructed by students and faculty in UW’s Applied Physics Laboratory and Mechanical Engineering Department, the robot has been prepared for underwater use, which brings along many engineering challenges including hydrodynamic optimization, underwater navigation and marinization of the actuators and electronics needed to get the job done.

“We have an incredible team that has risen to these challenges. Without the close collaboration of faculty, students and professional engineers, development of a system like this wouldn’t be possible,” Stewart said. “It’s exciting what can be done in this collaborative environment at UW.” 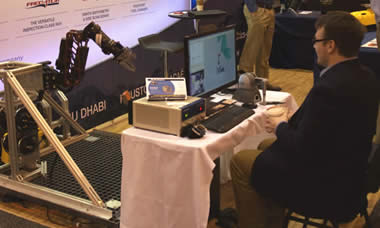 Building underwater robots is nothing new for Stewart, who is also an ocean engineer for BluHaptics, a 2014 UW start-up with origins in the EE BioRobotics Lab. While the Millennium Falcon robot does not currently use BluHaptics technology, planning is under way to equip the Millennium Falcon with BluHaptics technology in the future, particularly to aid in docking. Ryan Cox, an EE undergraduate student and one of the founders of the UW Underwater Robotics Club, is exploring this very concept through his senior capstone project.

The haptic technology developed by BluHaptics enables robots to be controlled from a distance and allows the robot operator to feel remote objects, helping to better guide the robot to a desired location. BluHaptics is a UW spinoff, built largely around the results of the EE Ph.D. dissertation of Fredrik Rydén. Last year, BluHaptics was named one of five UW start-ups to watch by Puget Sound Business Journal. EE Professor and co-director of the BioRobotics Lab, Howard Chizeck, is Chairman of the Board for BluHaptics.

“The technology allows a person to use a robot-attached tool, like a gripper, in environments where humans can’t go—places that are too hot, too cold, too toxic, too biohazardous, too radioactive, too small, too large, or too far away.” Chizeck said. “It makes operating a telerobot as easy to do as using your hand.”