Popular Science Names PoWiFi System One of the Most Innovative Technologies

Developed by EE and CSE researchers, the Power Over Wi-Fi (PoWiFi) system has been named one of the most innovative technologies of the year by Popular Science. With thousands of nominations, 100 were selected for inclusion in the magazine’s annual Best of What’s New 2015 awards. 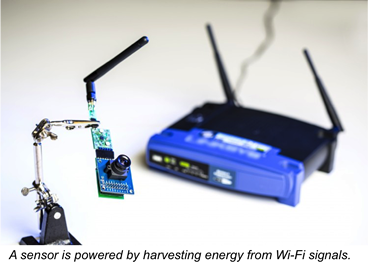 Able to harvest energy from Wi-Fi signals, the PoWiFi system is the first of its kind to deliver power and work with existing Wi-Fi hardware, without affecting the network’s performance. PoWiFi has the potential to impact the Internet of Things, which connects everyday devices to the Internet, such as thermostats and appliances, and is currently limited by communication and power issues.

Proving the effectiveness of the system, the researchers used energy from Wi-Fi signals to power a battery free temperature sensor and camera sensor at distances of up to 20 feet. They also wirelessly recharged batteries at distances of up to 28 feet. To demonstrate that their prototype can successfully be powered wirelessly in a real-world setting, the researchers tested their system in six homes.

The research team will present their final paper at the Association for Computing Machinery’s CoNEXT 2015 conference in December 2015.