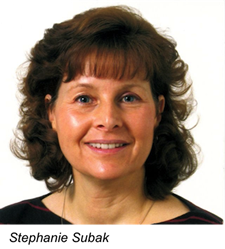 In honor of UW EE alum Stephanie Subak, who was an inspiration to students and an advocate for women in the electrical engineering field, Subak’s employer for more than 34 years, Fluke Corporation, has established the Stephanie Subak Memorial Scholarship.

Subak, 58, passed away while doing what she loved—frequenting the outdoors. An avid outdoorswoman, Subak fell while hiking with friends in the Sierra Nevada mountain range on August 5, 2015.

After graduating with a BSEE in 1980, Subak joined Fluke Corporation, where she was the second woman engineer to be hired. Over the years she became a leader in the company and was promoted to Director of Engineering for the Industrial Products Group. Subak worked at Fluke Corporation until September 2014, when she took a sabbatical to volunteer and spend more time with her family.

Throughout the years, Subak remained involved in the UW EE Department. She was a conduit to providing excellent internships to students and served as the keynote speaker for the UW EE IEEE Student Professional Awareness Conference in April 2013, where she impressed students with her keynote speech on what managers look for when hiring engineers. Subak was also a strong supporter of the Society of Women Engineers.

Starting this academic year, an annual $5,000 scholarship will be awarded to an undergraduate student, with preference given to students in the Departments of Electrical Engineering and Computer Science & Engineering. The recipient will be selected by the Dean of the College of Engineering, advised by organizations within the college that support women in engineering.

To contribute to the memorial scholarship, a fund is also available for online donations.