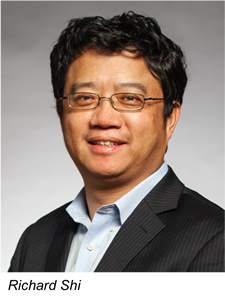 Thanks to a new Defense Advanced Research Projects Agency (DARPA) grant, EE Professor Richard Shi will be developing specialized sensors that are able to operate with minimal power and remain dormant until triggered. Developed for the Department of Defense, the new sensors are anticipated to enable monitoring in areas not currently feasible with power-hungry sensors.

Through the Near Zero Power RF and Sensor Operations (N-ZERO) program, Shi will develop specialized sensors that are capable of continuously and passively monitoring the environment, with the ability to fully activate in response to specific triggers. Current sensors consume power continuously, which in turn limits the sensor lifetime to months. Expensive batteries must also be frequently replaced.

In addition to current sensors consuming power continuously, a considerable amount of energy is also used by the electronic devices that communicate with the sensors. Therefore, the project will also entail developing radio receivers that are capable of being activated by a radio frequency trigger. Similar to the sensors, this will enable the radio receivers to expand power only when useful information is communicated.

The overall objective of the new sensor technology is to enable new missions, such as border protection and infrastructure monitoring. Requiring much less maintenance, and less frequent battery replacement, the new sensors will be able to be located in areas that have previously not been feasible.