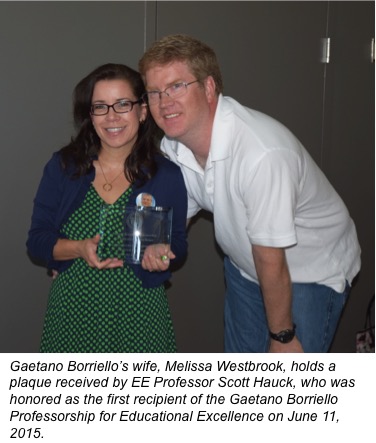 Known for his dedication to students, Borriello was devoted to the UW, which was the only university he applied to upon graduating from Berkeley in 1988. It is fitting, then, that the professorship be awarded to Hauck, who was mentored by Borriello while completing his Ph.D. in Computer Science & Engineering at UW in 1995.

According to the nomination, written by EE chair Radha Poovendran and CSE chair Hank Levy, Hauck exemplifies many of Borriello’s ideals of educational excellence, stating that this is a “clear case of the apple not falling far from the tree.”

Additional excerpts are included below:

“Gaetano was an extraordinary faculty member in every respect. While his research had tremendous impact, his focus was first and foremost on his students, on our educational programs in EE and CSE, and on continually strengthening the bridges between our two departments. He exemplified our mission at the University of Washington: to provide an extraordinary educational experience for our students, in which they discover, pursue, and achieve their potential; to conduct leading-edge research, but in the context of education rather than purely for its own sake; ultimately, to make the world a better place through the impact of our teaching, research, and mentoring. Given this context, it is not difficult to identify the most appropriate person to be the inaugural holder of the Gaetano Borriello Professorship for Educational Excellence: Professor Scott Hauck of the Department of Electrical Engineering. It is our honor and pleasure to recommend, with great confidence and enthusiasm, that Scott Hauck be awarded the Borriello Professorship."

“Scott is dedicated to his students, and more broadly to educational excellence. He is a recipient, like Gaetano, of the University of Washington Distinguished Teaching Award. He also is a recipient of the UW College of Engineering Faculty Innovator Award for Teaching & Learning, the UW Electrical Engineering Outstanding Research Advisor Award, and the Northwestern University Electrical and Computer Engineering Best Teacher Award. His own students have followed in his footsteps, receiving strong recognition for their accomplishments."

In Borriello’s honor and memory, the CSE Department also established the Gaetano Borriello Fellowship for Change to support students whose work is focused on exploring how technology can improve the lives of under-served populations.