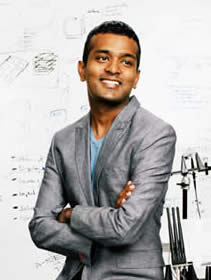 EE Adjunct and CSE Professor Shyam Gollakota has been appointed a UW CoMotion Presidential Innovation Fellow in recognition of the impact of his innovations and entrepreneurial success.

The nomination materials highlight how Gollakota is a fearless scientist who is passionate about developing new ways to use wireless signals. Gollakota, together with Professor Josh Smith, developed the first system that both computes and communicates using energy harvested from radio waves. Gollakota is also developing the first whole-home gesture recognition system that operates through WiFi signals in the environment rather than user instrumentation or cameras.

“Shyam is a rising superstar. Far more than the other top- shelf researchers I know, he delivers fundamental wireless research that is ready-made for deployment and commercialization. He's done this time and time again with his projects recognizing gestures, breathing, and even heartbeats using a WiFi-enabled mobile phone as a sensor, and with battery-free computing in which he's approaching devices that communicate via WiFi. These are all "aha!" inventions that did not seem plausible beforehand. I expect his commercialization of these technologies to become much more visible over time – we've only seen the tip-of-the iceberg.”

“Just this year, Dr. Gollakota’s creativity was recognized by an MIT Technology Review TR-35 Award as well as by a Sloan Research Fellowship. Despite his young age, Gollakota has already received four best-paper awards from the top conferences in his field – something most scientists don’t achieve in a lifetime! Overall, Dr. Gollakota is brilliant and driven to invent a new world.”