Matt Reynolds and Shwetak Patel's SideSwipe is the Future of Smartphones 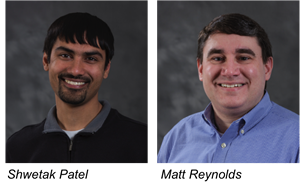 Developed in the labs of UW EE Professors Matt Reynolds and Shwetak Patel, SideSwipe technology was featured in the July issue of IEEE Signal Processing Magazine.

SideSwipe enables the entire space around a smartphone to become interactive using gesture control. The phone’s own wireless transmissions are used to sense and respond to specific hand gestures. This enables it to work even when the smartphone is out of sight in a pocket or bag. Early testing indicates the new technology, which can be easily built into future smartphones and tablets, recognizes gestures with 87% accuracy.