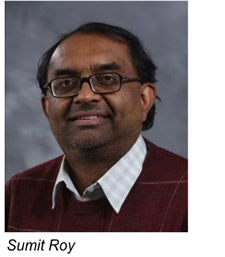 Thanks to a new NSF Science Across Virtual Institutes (SAVI) grant, EE Professor Sumit Roy will work with researchers from the United States and South Africa with the goal of bringing reliable, low-cost wireless broadband access to traditionally underserved areas. This is a pressing topic of importance for both countries.

As part of the NSF grant, a virtual institute called the Institute for Cognitive Networking (iCON) will be established to bring together a consortium of researchers from the United States and South Africa. In addition to UW, participating organizations include the Stevens Institute of Technology in New Jersey and the University of Pretoria in South Africa. Researchers will investigate the potential to utilize wireless spectrum white spaces, which are unlicensed frequencies that are available for use in certain areas, to bring low-cost reliable wireless broadband access to underserved areas.

The virtual institute is intended to support long-term international collaboration between the United States and South Africa, with the goal of accelerating wireless access research. A number of shared resources will be provided, including online resources, physical and virtual meetings, summer school and a graduate student exchange program. The virtual institute will also provide a mechanism to archive research, enabling future projects to build upon current and past research.