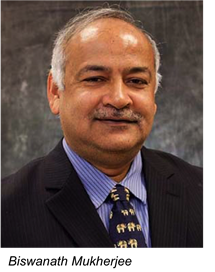 After completing his Ph.D. at UW EE, Mukherjee joined the University of California, Davis, College of Engineering. Mukherjee served as chair of the Department of Computer Science from 1997 to 2000 and was appointed to the College of Engineering’s Child Family Professorship in 2005. Mukherjee has been a prolific author, publishing numerous articles, research papers and a graduate-level textbook, 2006's Optical WDM Networks.

Mukherjee’s research interests are in the area of optical networks and security protocols, specifically lightwave networks. Establishing a reputation for his research in this area, he is a sought-after speaker at worldwide conferences. In addition to his research, Mukherjee was a founding member of the board of directors of a Silicon Valley startup, IPLocks Inc.