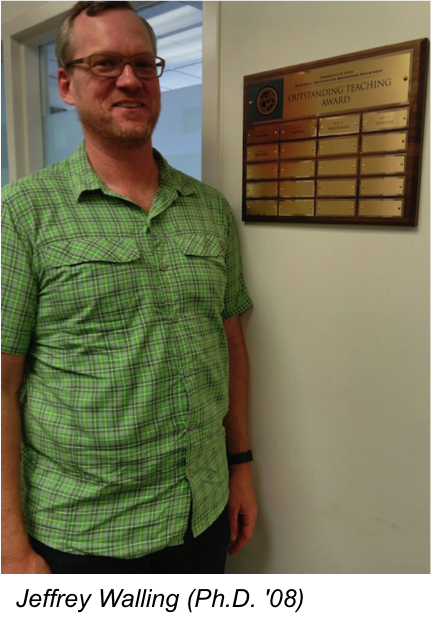 UW EE alum Jeffrey Walling (Ph.D. '08) was honored with the University of Utah’s Electrical and Computer Engineering Outstanding Teaching Award for 2015. This is the second excellence in teaching award Walling has received since he began teaching five years ago.

An assistant professor, Walling places an emphasis on providing various methods to help his students learn, including streaming lectures on YouTube.

Following his postdoctoral research at UW, Walling worked at Rutgers University as an assistant professor for one-and-a-half years. In 2012 he received an Award for Excellence in Teaching from the HKN chapter of Rutgers' Electrical and Computer Engineering Department.

Walling's research focus is integrated systems for communication and biological interfaces. He recently received an NSF grant to increase the resolution of digital power amplifier technology, known as the Switched-Capacitor Power Amplifier (SCPA), which he and a team of researchers developed at UW. The increase in resolution will enable the SCPA to be utilized as the heart of a digital wireless transmitter in MIMO systems like Wi-Fi and LTE (4G cellular networks).

Walling has authored more than 50 articles and holds four patents. He received the Best Paper Award at Mobicom 2012, the Yang Award for outstanding graduate research from the UW EE Department in 2008, an Intel Predoctoral Fellowship in 2007-2008, and the Analog Devices Outstanding Student Designer Award in 2006.