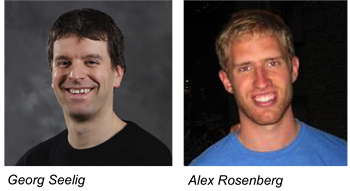 A new model that identifies genetic mutations with three times more accuracy than existing models has been developed by a team of researchers including EE & CSE Assistant Professor Georg Seelig and EE Ph.D. student Alex Rosenberg.

Able to better identify genetic mutations that may lead to diseases such as cancer and diabetes, the new model was used to create a Web tool, available for public use. Using the Web tool, researchers can type in the most commonly shared DNA sequence in a particular gene to find out the mutations that may result in various diseases.

The model is the first to train a machine learning algorithm on large amounts of genetic data created with synthetic biology techniques. Since machine learning algorithms become increasing accurate the more data they are exposed to, the research team created a larger library of synthetic data for the algorithm to reference. This allows the Web tool to be three times more accurate than existing models and is able to accurately predict which genetic mutations may be red flags for the development of various diseases.

The research was highlighted in a paper published in Cell on October 22, 2015.