Combining two good ideas can lead to a great breakthrough. UW EE researchers in the Sensor Systems Lab, in collaboration with Disney Research, combined a battery-free camera project with a wirelessly powered localization project to produce battery-free smart camera nodes that are able to automatically determine their own location.

The research may lead to large networks of camera sensors that require little maintenance, due to their battery-free operation. Being able to pinpoint the exact location of sensors can produce high-level data, including building 3D models of the environment. Specific applications may include using the camera sensors to monitor hard-to-reach areas, such as the infrastructure of bridges, as well as security purposes.

“The idea of localizing battery-free cameras using their own camera is a new idea that no one has come up with before,” said UW EE Ph.D. student Saman Naderiparizi, one of the researchers on the team.

The collaboration surfaced while Zhao was completing an internship at Disney Research with Sample. A battery-free camera project, known as WISPCam, was already underway in the Sensor Systems Lab and Zhao was working on wirelessly powered localization when the idea surfaced to combine the two projects. The WISPCam harvests power from RF signals generated by an RFID reader. 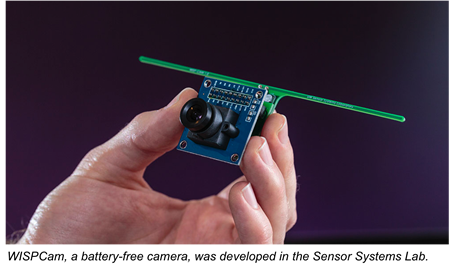 With the new research, the WISPCams use optical cues to determine their location and the direction they face. The battery-free cameras are also capable of on-board computation to reduce the amount of data transferred, which makes them ideal for settings where bandwidth is limited.

“By enabling sensors to make more smart decisions on-board without the need for relaying the decision making on the reader host side, it avoids overloading the network,” Naderiparizi said.

Still in the research phase, the team is evaluating potential uses for the technology, including applications at Disney Research and beyond.

The research was presented earlier this month at Ubicomp 2015, the International Joint Conference on Pervasive and Ubiquitous Computing, held in Osaka, Japan.