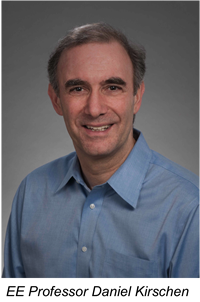 EE Professor Daniel Kirschen has received funding to work toward improving the electric grid, particularly as it pertains to storing and using excess wind energy. With an outdated electric grid, and an increase in renewable energy usage, ensuring that energy is being optimally used is a current challenge in the field.

Sponsored by the Bonneville Power Administration (BPA), which is based in the Pacific Northwest and provides about one-third of the electric power used in the Northwest, the objective of the project is to improve the operation of BPA’s network, which is currently overwhelmed by the rapid expansion of wind generation. With a total budget of more than $2.5 million, $180,000 will fund the portion to be completed at UW EE.

The project extends Kirschen’s previous research, undertaken together with the University of Michigan, to develop an energy positioning system that routes energy to various locations during peak times when extra energy is generated. Called the Renewable Energy Positioning System, the technology developed will be used to design a system specifically for BPA, allowing them to more reliably store and use energy during times of high generation and low demand.

“We are delighted to have the opportunity to deploy our advanced grid control technology in collaboration with local technology and utility companies,” Kirschen said. “Optimally controlled energy storage has the potential to revolutionize how the grid is operated and to greatly increase the amount of renewable energy it can handle.”

In the existing electric grid, the amount of energy produced must at all times be equal to the amount of energy consumed. In order to not overwhelm the system, wind power is often reduced during times of high generation, which doesn’t make good use of excess green energy.

“This is a problem when there is a lot of wind at the same time as a lot of water behind the dams on the Columbia River,” Kirschen said.

The research is timely, with several renewable energy incentives on the horizon, such as the Washington Clean Energy Fund and the California PUC directive, which requires state utilities to purchase 1.3 GW of energy storage resources by the year 2020.

The project is being undertaken in collaboration with Snohomish PUD and the local startup company 1EnergySystems. As part of the project, software will be developed to facilitate communication between BPA and the utilities it serves. The system will be refined through testing at Snohomish PUD, the largest consumer of BPA power.