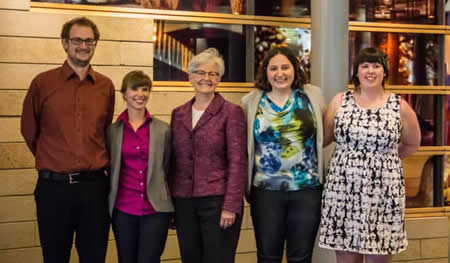 The hard work of UW engineering students will make life easier for a certain group of people: those traveling in wheelchairs or on crutches. Comprised of four students, including UW EE Ph.D. student Nick Bolten, team Hackcessible won first place at the civic Hack the Commute competition for their app that plans travel routes for people with limited mobility.

The team’s project, AccessMap, is an interactive web application that displays sidewalk accessibility information overlaid on a map. AccessMap enables people with limited mobility to plan their trips in advance or on-the-go by helping them avoid difficult or impossible paths. The map displays several types of information, including sidewalk slopes (elevation change) and the location of curb ramps, so users know when an intersection is crossable, or construction blocks sidewalks. 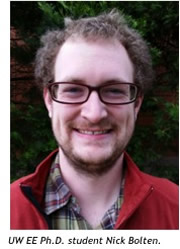 With the goal of bringing entrepreneurs together to find solutions to transportation problems, Hack the Commute is sponsored by the City of Seattle and Commute Seattle. In addition to Bolten, the team is comprised of UW students Reagan Middlebrook, a senior in Computer Science and Systems; Veronika Sipeeva, a Human Centered Design and Engineering (HCDE) master's student; and Allie Deford, a HCDE master’s student. The students teamed up in March during the first round of Hack the Commute, when they all gravitated to a roundtable discussion focused on accessibility topics.

“It became clear that commuters with limited mobility need to know information about the sidewalks to and from their destinations, but that information just wasn't available in any centralized, up-to-date format,” said Bolten.

After spending just 48 hours developing a functional prototype for AccessMap, the team presented their work to a panel of judges and were one of three teams selected to advance to the championship round. For the next five weeks, the team worked closely with Anat Caspi, Director of the Taskar Center for Accessibility Technology, and Alan Borning, Computer Science & Engineering Professor, to further develop the app.

“We were all extremely surprised during the first round. We thought the other teams had produced such great work,” Bolten said. “We put a lot of work in during the following five weeks and knew we had something impressive to show for the final round.”

During the championship round, the team presented their project to a panel of judges at Seattle City Hall on April 29. As the winning team, each team member received a Kindle, $200 of course credit from General Assembly, a six-month membership at Impact Hub Seattle and three years of Microsoft Azure credits. The team plans to continue development of the app, focusing on user testing, trip planning and improving and adding more data sources.

“I would recommend taking advantage of any opportunities to volunteer the skills you learn in electrical engineering, like joining civic hackathons or weekly hacking nights,” said Bolten. “Contributing to a project improves your own skills and is a great way to give back to the community.”