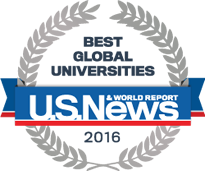 The University of Washington is ranked #11 by U.S. News & World Report for Best Global Universities for 2016. A total of 750 universities were evaluated and ranked based on several factors including reputation across the world and region, research, publications cited and international collaboration.

The new ranking comes less than a month after Reuters named the UW the most innovative public university in the world, and fourth overall behind only Stanford, MIT and Harvard.