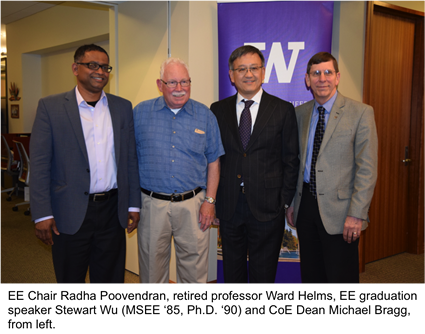 Emeritus faculty member Ward Helms was surprised with an award honoring 40 years of dedication and service to UW Electrical Engineering during the department's Commencement Ceremony on June 12, 2015. Ward was presented with the award by his former student, Dr. Stewart Wu (Ph.D. ’90), who was the commencement speaker.

The award honors Helms’ dedication to UW EE from 1964 to 2004. After receiving his Ph.D. at UW EE, Helms joined the department as a faculty member. Helms’ advisor and mentor was Professor H. Myron Swarm, one of two principal investigators of the UW Antarctic Project, which involved laying a 21 mile dipole antenna on the 8,000 foot thick ice to transmit VLF signals. During his Ph.D., Helms studied the lower ionosphere and designed the first VLF radar system in Antarctica. Due to his significant research, the U.S. Board on Geographic Names named a mountain in Antarctica after him. 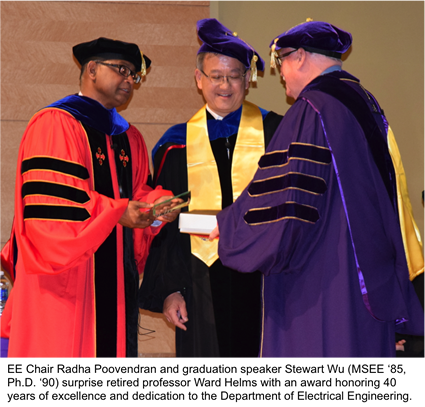 “My research was using these signals to probe the lowest portions of the ionosphere, the D-Region, with a 25 kW transmitter built in the EE basement,” Helms said. “We discovered the great effect of solar storms on the polar D-Region, causing radio blackouts. These are now known as Coronal Mass Ejections and are measured by satellite.”

Helms’ research evolved over the years. After studying electronic system design, he founded the department’s integrated circuit program, which he taught for 36 years. Working with motivated students and seeing them succeed was the highlight of his career, Helms said.

Helms and his wife, Elizabeth, live on Camano Island. They have three children and seven grandchildren. Helms stays busy with bowling, boating and Ham radio.

Congratulations, Ward, on 40 years of excellence!