EE Students at We Robot 2015 Conference 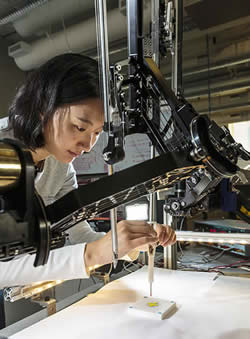 With emerging technologies such as personal drones and surgical robotics becoming more commonplace, discussing the legal and ethical issues of robots is becoming increasingly important. Bringing together students from various universities and fields of study to explore questions regarding the impact of robots on society, the fourth annual conference on robotics, law and policy, We Robot 2015, will be held on the UW Campus April 10-11.

We Robot 2015 fosters communication between engineers who design and build robots and people working in the legal field who make decisions impacting how robots are permitted to operate. Held at the UW School of Law, attendance is free, but registration is required.

The conference is an opportunity for engineers and computer scientists to interact with the legal community to help design future policy and law, said EE Professor and co-director of the UW BioRobotics Lab, Howard Chizeck, who is a member of the conference program committee.

"Questions of policy, ethics and legality that arise from new technologies are being addressed as they arise, or in anticipation of new developments, rather than after they become crises,” Chizeck said.

View a complete schedule of events and presentations.