Leaders Gather at UW to Define Vision for Smart Communities 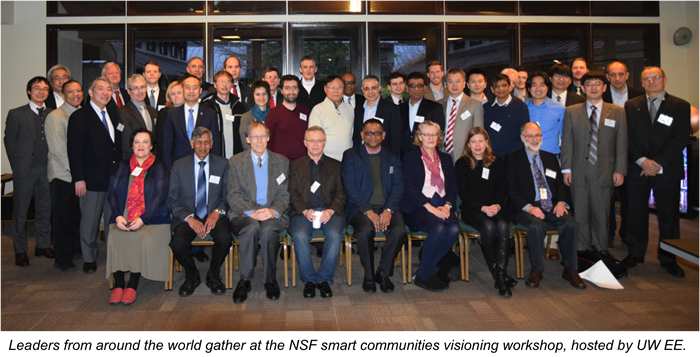 Smart city leaders from around the world are gathering at UW’s Seattle campus for a two-day workshop called the “NSF Visioning Workshop on Smart and Connected Communities Research and Education” to discuss the future of smart and connected communities on January 13-14, 2016. The UW Department of Electrical Engineering is organizing and hosting the workshop, on behalf of the National Science Foundation, with the goal of facilitating dialogue between stakeholders, including municipalities, states, cities, universities, industry, federal government and private foundations.

The concept of creating smart communities is emerging as a way to address a variety of problems facing both busy urban centers and rural communities. By utilizing data analytics, sensors and other technology, the goal is to overcome various challenges, such as power distribution, healthcare, transportation, air quality and access to education, shelter, water and food. 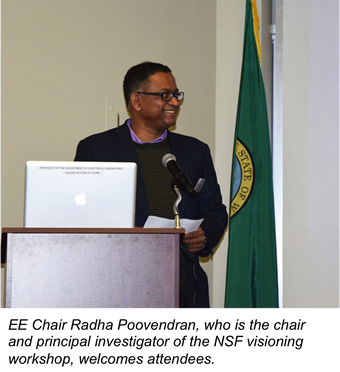 According to a September 2015 statement from President Barack Obama, the White House announced a new “Smart Cities” initiative that will invest more than $160 million in federal research to help communities improve services.

“Every community is different, with different needs and different approaches. But communities that are making the most progress on these issues have some things in common. They don't look for a single silver bullet; instead they bring together local government and nonprofits and businesses and teachers and parents around a shared goal,” according to a statement from President Barack Obama.

The NSF visioning workshop brings together 50 leaders from around the world, including leading industry representatives from Honeywell and Amazon, to discuss and define a vision for smart and connected communities. Presentations and discussions highlight a variety of smart community topics, such as city planning and management, urban infrastructure and systems, emerging technologies and social, cultural and economic challenges. An international panel will also feature presentations from leaders from the Netherlands, Japan, Barcelona, China, Japan and Taiwan. Local speakers include Seattle's Chief Technology Officer Michael Mattmiller, who will be speaking about data-driven city management, and Leonard Forsman from the Suquamish Tribe, who will discuss the tribal community’s perspective on smart cities development. 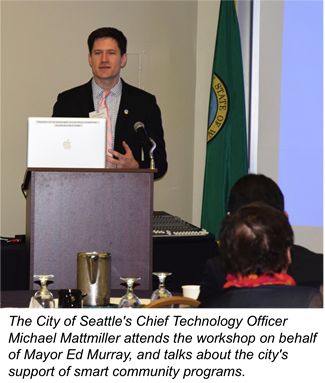 A leader in emerging smart community technologies, the UW Department of Electrical Engineering has many faculty researching various components of smart communities, from power systems to transportation to the Internet of Things. UW is also well represented by the new Urban@UW collaboration, led by Associate Professor Thaisa Way, from the UW College of Built Environments, who is an active participant in the NSF visioning workshop. On the founding committee of Urban@UW, Bill Howe, who is the Associate Director and Senior Data Science Fellow for the eScience Institute, is also working to develop smart community programs.