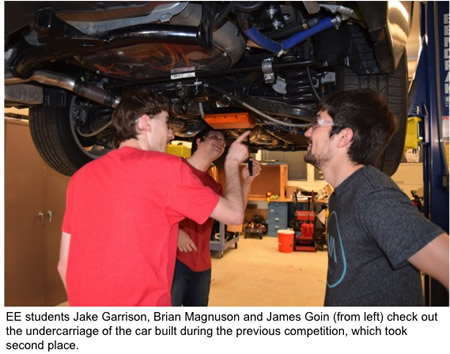 Seattle may not be known for its automobile industry and UW may not even have an official automotive program, but if you step inside the UW EcoCAR3 team lab you may think otherwise. Especially when you hear how well the team performed at their first competition last year.

“We did remarkably well last year and made a good footprint for ourselves” said Bruce Darling, Electrical Engineering Professor and one of three faculty advisors for the team.

Seattle will host the Year 1 competition for EcoCAR3 from May 29 to June 4, marking the competition’s first visit to the city. After presenting their final designs to a panel of judges, the EcoCAR3 team will be scored on how well they justify their designs. The team previously received approval to proceed with their top choices after submitting several design proposals.

Winning 10 different awards, the UW team placed second last year in the EcoCAR2 competition, which spanned three years. The UW team competed against strong teams from cities with a history of automobile manufacturing and schools with automotive programs, which usually dominate the competition, said Darling.

Building upon previous success, and with even more students articipating, the current EcoCAR3 competition spans four years. Comprised of 80 students, 32 of whom are electrical engineering students, the team continually adds new members as team mates graduate. Mostly undergraduates, members are from various engineering disciplines as well as the business and design schools. The team operates like a small company, with students working not only on car development, but financing and communications as well. Most members spend about 10 hours per week in the lab; team leads easily clock an average of 40 hours. 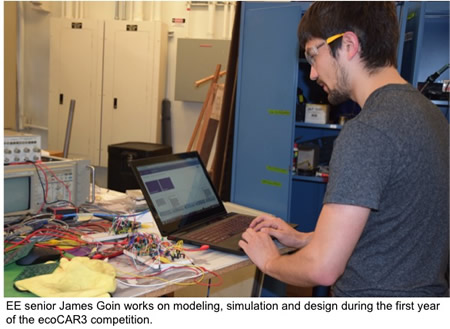 “Students often have 3-4 very competitive job offers after participating in this,” Darling said.

The goal of EcoCAR3 is to convert a gasoline powered Chevrolet Camaro into an advanced hybrid electric vehicle to reduce fuel consumption. The first year of the four-year competition is spent focusing on the designs of the car, which are presented to, reviewed and approved by contest organizers. All competing teams will receive a new Chevy Camaro from General Motors in December 2015. Once received, the car will be stripped down to a core skeleton. In addition to removing the stock powertrain and replacing it with a more fuel-efficient model, the students will start implementing their unique designs. The team plans to build on designs from the previous competition, with the goal of making the car even lighter and faster. Teams are held to strict standards, such as weight and speed, and the final vehicle must meet industry standards for safety and road worthiness.

“The design of the car is pretty awesome and it will make over 450 brake horsepower,” said engineering lead Brian Magnuson, MSEE. “It will also be fun to drive and will handle well.”

A fourth year was added to the competition to allow more time for innovation. The students, who have all signed non-disclosure statements, can’t yet talk too much about specific features. But they do mention plans for a predictive driving control strategy consisting of an onboard computer, updated daily while the car charges, which will gather road data, such as speed, elevations and intersections. The data will be used to implement strategies to conserve energy, with improvements of 6% in simulation, said Magnuson.

“You can get an idea of where the sweet spots might be on the road to improve the generator control and regenerative braking,” Magnuson said. “It will also recognize where the driver goes on a daily basis; if the driver goes down a hill on the way to work every day, we may cut the torque from the generator and send more energy to the brakes.”

EcoCAR3 is anticipated to be more difficult than the previous competition, said faculty advisor Brian Fabien, a professor in the Department of Mechanical Engineering. There is less space in the Chevy Camaro to implement new architectures, making it a design challenge. There are also more teams competing, a total of 16. But as far as Fabien is concerned, the UW team is up for the challenge. Despite not having an automotive program, the students make up for the lack of expertise by spending the extra time needed to implement cutting-edge designs, he said.

“The rest of the schools in the competition do not think we are disadvantaged,” Fabien said. “They look at our performance.”

Unprecedented for a first time competitor, the UW EcoCAR2 team won 10 awards and took second place overall in last year’s competition. The EcoCAR2 competition was a three-year competition to hybridize a Chevy Malibu. The team placed first in 0-60 mph acceleration, first in 50-70 mph acceleration and second in the Freescale innovation award. Design highlights include: