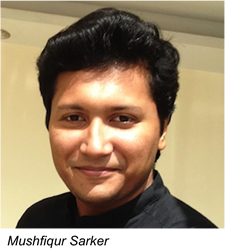 An energy storage optimization start-up, which was founded by an interdisciplinary team of students, including EE graduate student Mushfiqur Sarker, was presented at the Advanced Research Projects Agency- Energy (ARPA-E) Innovation Summit at the nation’s capital in early March.

Out of several hundred ARPA-E projects, this was one of only six in the nation to be showcased at the annual conference that highlights transformational energy technologies. Chemical Engineering Professor Venkat Subramanian, who serves as the Chief Scientific Advisor for the battery optimization start-up, Battery Informatics, Inc., presented the project during a congressional showcase at the summit.

The start-up was founded in December 2015 to commercialize technology that originated in the Chemical Engineering and Electrical Engineering Departments at UW. The software developed by the Battery Informatics team is targeted for the growing energy storage market, particularly large-scale energy storage batteries installed in the power grid.

Through a combination of longer battery life, lower capital costs and improved economic benefits, the software is expected to demonstrate a 20% enhancement in performance. The software will operate as a real-time control system to either replace or enhance existing battery management systems such as those used by power utility companies or commercial buildings.