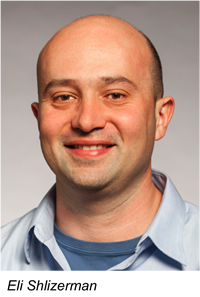 The secret ways of the migratory monarch butterfly are not so secret anymore, thanks to a research team that includes assistant professor Eli Shlizerman, who has joint appointments in the Electrical Engineering and Applied Mathematics departments. The researchers have uncovered how exactly monarch butterflies process information about the time of day and the sun’s position on the horizon to successfully migrate to the south each year. The research has implications for the development and design of bio-inspired systems, such as autonomous flight navigation controllers.

Monarch butterflies fly long distances, as far as 2,500 miles every fall, to spend the winter in the same trees every year in central Mexico. To fly in a constant southwest direction, they rely on a combination of an internal sun compass and circadian clock. Throughout their journey, the butterflies constantly adjust their direction to maintain a southern orientation.

While the monarch’s ability to integrate the time of day and the sun’s position on the horizon have already been uncovered, one remaining question has been how the monarch’s brain receives and processes the information. Shlizerman and fellow researchers addressed this by creating a model that reveals how exactly the monarch’s brain responds to the data.

To do so, the researchers recorded signals from antennae nerves as well as light information from monarch eyes. The antennae of monarch butterflies contain a light-sensitive clock mechanism, which has been shown to calibrate the sun compass. The butterfly’s eyes, which are shaped as half spheres and separated 180 degrees from each other, detect the sun’s position.

The research team’s paper was published in the April edition of Cell Reports.