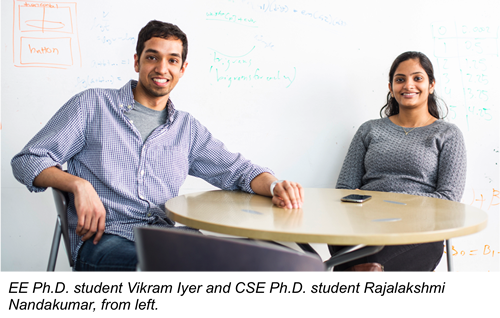 Imagine gesturing in thin air to press a button or scroll through pages on a smartphone or smartwatch, without ever touching the device. New technology, called FingerIO, is making this a reality.

Developed in Shyam Gollakota’s Networks & Mobile Systems Lab by EE Ph.D. student Vikram Iyer and CSE Ph.D. student Rajalakshmi Nandakumar, FingerIO makes it easier than ever to interact with devices that have small screens by simply gesturing or writing on any nearby surface, such as a tabletop. 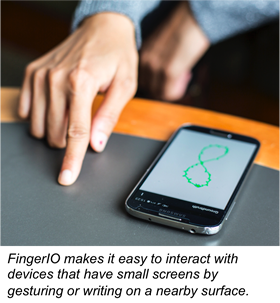 FingerIO does not require any special finger instrumentation, sensors or hardware. The technology operates by transforming the device, such as a smartphone or smartwatch, into an active sonar system. It does this by utilizing the device’s existing speakers and microphones to track inaudible sound waves. FingerIO turns the device into a sonar system using the smartphone or smartwatch’s existing speaker to emit an inaudible sound wave. Signals bounce off the finger and the echoes are recorded by the microphones, which can then calculate the finger’s location in space.

The researchers have demonstrated that FingerIO can track two-dimensional finger movements accurately enough to interact successfully with mobile devices, to within 8mm. The research team’s paper will be presented at the Association for Computing Machinery’s CHI 2016 conference in San Jose, California, in May 2016.