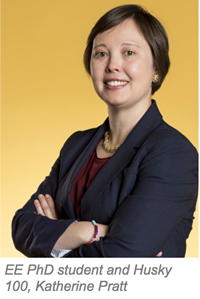 For electrical engineering PhD student, Katherine Pratt, being named a Husky 100 creates opportunities. However, she is not just focused on her own career or future. Instead, she wants to leverage these opportunities to serve a broader community – veterans and women in STEM.

“Being a Husky 100 offers me a platform to share my experiences with others, bring more women and minorities into STEM, and support my fellow veterans as they transition out of the military and onto a college campus,” Pratt said.

Pratt graduated from MIT with a degree in aerospace engineering, and completed several internships with Blue Origin.  Then she joined the United States Air Force. She has always had a passion for neuroengineering, a discipline that utilizes engineering techniques and applies them to enhancing or repairing neural systems. She began working with Professor Howard Chizeck and the BioRobotics Lab.

“One thing that I love about neuroengineering is that it encompasses so many things; it is very cross-disciplinary,” Pratt said. “For example, in our lab, we have a philosopher that investigates neuroethics.”

Because the human brain is a very personal space, the concept of neuroethics has become a robust field of study. For Pratt, neuroengineering seeps into additional high-impact work, such as policy, governance, and individual security.

“When you’re recording peoples’ brain signals, you’re on shaky ground,” Pratt said. “You really have to focus on making sure the appropriate regulations are in place and that there is incredible transparency. After I graduate, I would love to have a hand in crafting the policy necessary for the field to be successful.”

The Husky 100 is awarded to individuals who make an impact inside and outside the classroom. Those who are recognized have made a difference on campus, in their communities and for the future. As a successful engineer, a woman in STEM and a veteran, Pratt’s impact on the future is great.