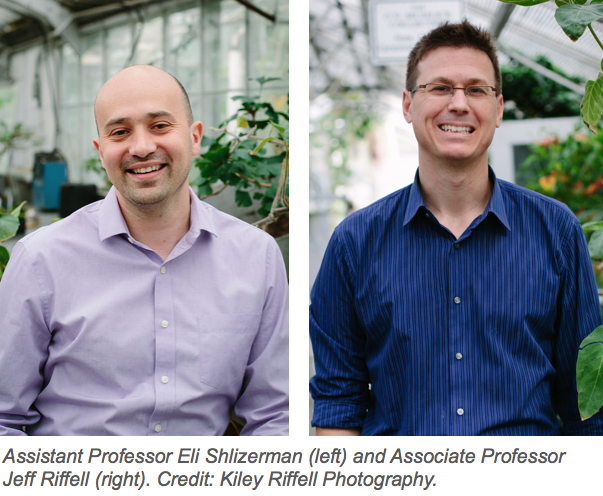 Assistant Professor of Electrical Engineering and Applied Mathematics Eli Shlizerman, along with Associate Professor of Biology Jeff Riffell, receive an award from the Air Force Office of Scientific Research (AFOSR) to study the mosquito olfactory system. This research will unearth the odor fingerprints of humans to mosquitoes, allowing for the development of bio-inspired detection systems.

The four-year project will investigate the mosquito olfactory system – a complex structure that is critically important, but not well understood. Through this in-depth investigation, the researchers will gain insight into how the mosquito’s olfactory neuronal network is able to identify and target humans.

Mosquitoes, which are considered the most dangerous animal in the world, kill over 700,000 people each year, mostly due to diseases like malaria and dengue. Understanding the sensory details of these insects carries significant societal impact. Shlizerman and Riffell’s approach investigates human scent “fingerprints.”

The human biomarkers – or odor fingerprints – are very complex, containing over 350 volatiles (or scents sensed by the olfactory system). From understanding how mosquitoes nervous system is processing these odors there is a potential to resolve the neural coding that identifies humans and distinguishes them from other species.

Resolution of chemi-signatures can also assist in understanding how neural network should be designed to process complex chemical environments, for disease detection through classification of abnormalities, and to aid in the development of new mosquito repellents. This is particularly important in regions of the world where mosquito-borne infectious diseases, like malaria or dengue, are endemic.

The researchers will employ a three-pronged approach for piecing together the neural coding of the mosquito olfactory system: they will first characterize human scent volatiles; then they will explore the possible neural network building blocks that provide detection and discrimination of human scent through development of machine learning methods to parse neural activity; and build an artificial in-silico antennal lobe that detects volatiles at trace levels.

“After the four-year grant the researchers plan to transform the unique functionalities of the mosquitos’ olfaction toward the design of novel sensors,” Shlizerman said.