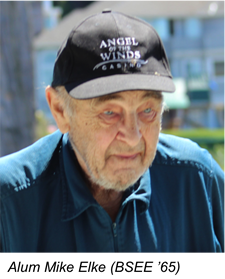 The Department of Electrical Engineering sadly announces the recent passing of devoted alum Mike Elke (BSEE ’65), who supported students through the establishment of an endowed scholarship. Elke passed away during a fire at his home in Everett, the same house where he grew up.

Elke, 76, established the Michael E. Elke Endowed Scholarship in December 2000 to support undergraduate students pursuing electrical engineering. Elke was motivated to fund the scholarship based on his own struggles to make ends meet during college.

During Elke’s college years, he missed out on study groups and other college activities due to his work schedule. He also couldn’t afford to live in a dorm, which meant his time on campus was limited. As a result, Elke’s grades suffered and he felt discouraged until he received a scholarship during his senior year, based on economic need. The scholarship had a drastic impact on Elke and he was able to quit his job, move to campus and attend study groups. His grades immediately improved and Elke graduated in 1965 with his bachelor’s degree in electrical engineering.

Following graduation, Elke accepted a job with General Electric, where he became an expert in power systems. During his 30-year career with General Electric, Elke traveled the world installing and inspecting complex power systems until retiring in 1995. During his retirement years, the establishment of the scholarship and opportunity to support students made Elke very proud.