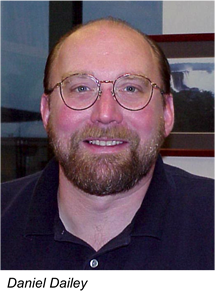 The Department of Electrical Engineering sadly announces the recent passing of faculty member Daniel Dailey on March 28, 2016, at the age of 60. A research professor who specialized in intelligent transportation, Dailey most recently resided in Washington D.C., where he worked as a visiting scientist at the Turner-Fairbank Highway Research Center and the Saxton Transportation Operations Lab, operated by the U.S. Department of Transportation.

Colleagues remember Dailey as a “true transportation engineer” who developed the precursor to OneBusAway, called MyBus. Created in the 1990s by Dailey, MyBus allowed people to type in a bus route and bus stop number on a computer to receive expected arrival times of Metro buses in Seattle. OneBusAway was later developed with the same back-end technology that combines odometer readings and route information to track the location of buses.

Dailey received his Ph.D. and Master’s degrees from UW in 1982 and 1988, advised by Professor Bob Albrecht. He was a faculty member for more than 23 years, beginning his career at UW in July 1992. During his time at UW, Dailey served as the Director of the Intelligent Transportation Systems Lab from 1998-2011, which entailed overseeing multiple million-dollar projects from the Washington State Department of Transportation. He also held an adjunct appointment in UW Civil Engineering.

Dailey was involved in IEEE, serving as past-president of the IEEE Intelligent Transportation Systems (ITS) Society, which he helped transform from the previous ITS Council. He recently served as the ITS Society’s VP for Administrative Activities. Dailey published numerous articles in the areas of GIS, GPS, distributed computing, modeling of stochastic processes and ITS systems. He co-authored a book titled "Wireless Communication for Intelligent Transportation Systems."