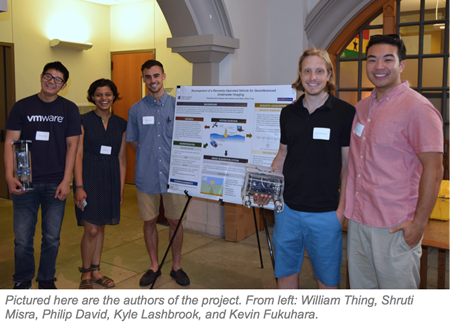 In collaboration with Booz Allen Hamilton, students with the Department of Electrical Engineering design and implement the hardware for an underwater mapping device. The product was developed as a part of the students' Entrepreneurial Design Capstone project.

More defined imaging of the oceanic floor will unravel a swell of possibilities, including low-cost maritime sensing (or underwater surveillance) and deployment applications and military training and simulation functions. 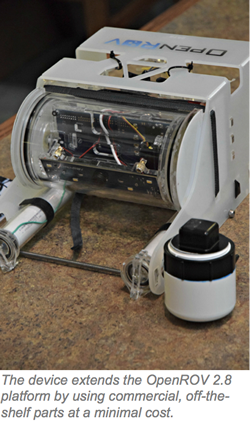 The development of visualization software is currently underway at Booz Allen Hamilton. The students were tasked with the development of a hardware that had to be as low cost as possible. This led to a scramble for the best (and cheapest) system components - including the invention of some from scratch – and the use of open-source hardware (design information that is free and readily available).

The project was originally slated as a 6-month assignment. However, due to increasing interest and opportunity for growth, the project has the potential for legacy and may become a yearlong capstone project for incoming seniors. For the students who worked on the device for the last 6 months, saying goodbye would be a struggle.

“This project really became such a part of our lives,” graduating senior, Kevin Fukuhara, said. “There were times when there were so many challenges. It was a struggle. However, we had such an amazing team and such an amazing leader in Phil [David].”

The next phase of the project involves advanced testing and the development of subsequent iterations, including a sustainable energy implementation, pinpoint accuracy on acoustic signaling, and a streamlined communication system. Seeing this project evolve will be as beautiful as seeing it drift along the ocean floor.