With the proliferation of cell phones, having a hand in the mobile revolution is more than noteworthy— it’s award worthy. UW Electrical Engineering Affiliate Professor Bishnu Atal received an IEEE 20th Century Landmark Award in recognition of his contributions to mobile technology.

“I feel good that I am able to take part in this big celebration,” said Atal, who accepted the award at the IEEE Seattle 110th Anniversary Gala on October 19. 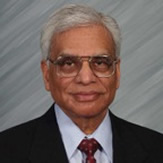 Inspired by the high cost of long-distance phone calls to his family in India when he first moved to the U.S., Atal’s research led to the invention of efficient digital speech encoding, which produces high-quality speech while compressing the bandwidth. This is now the standard for all modern digital voice coding for cell phones, Skype and more. As a result, wireless networks use less spectrum space and fewer towers, enabling even countries without substantial fiber-optic infrastructures to join the mobile revolution.

“If not for Bishnu’s voice coding inventions, we might not have the current hand-held computing revolution,” Electrical Engineering Professor Les Atlas said.

Born in India, Atal received his bachelor's degree in physics from the University of Lucknow and a Ph.D. in electrical engineering from Brooklyn Polytechnic Institute. He joined Bell Laboratories in 1961, where he researched speech and acoustics until retiring in 2002. Atal holds more than 16 patents.