“I feel humbled and honored to have been selected to receive this award from IEEE, especially in the company of Bishnu Atal, who also received the same award,” said Malvar, who accepted the award at the IEEE 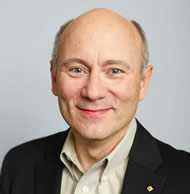 Malvar remembers studying Atal’s papers as a graduate student in Brazil in the late 1970s, which he said were influential in his decision to pursue a Ph.D. in signal processing. A Chief Scientist for Microsoft Research and a Microsoft Distinguished Engineer, Malvar also chairs the UWEE Advisory Board.

Malvar’s contributions to engineering include developing lapped transforms, which are used in media formats and many communications systems. He also worked on the video compression format H.264, which is now the most widely used video format for digital TV and Internet video such as YouTube and Netflix.

“Considering that every smartphone and every personal computing device has H.264 decoding built-in, and that almost two-thirds of all Internet traffic is video streams in that format, I am very happy about the impact,” Malvar said.

Malvar received a Ph.D. in electrical engineering and computer science from the Research Laboratory of Electronics at MIT. He is the inventor or co-inventor of 117 issued U.S. patents.