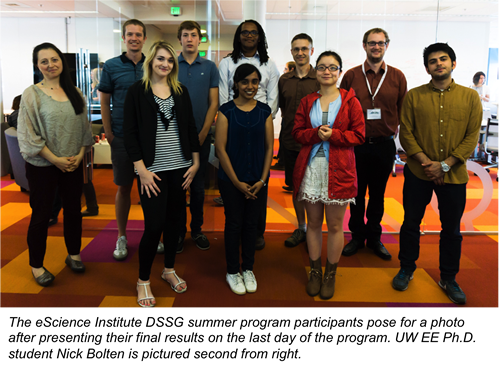 An engineering student project aimed at helping others received a little extra help over the summer, fittingly enough. Thanks to the eScience Institute’s Data Science for Social Good (DSSG) summer program, an engineering student project led by UW EE Ph.D. student Nick Bolten has made more progress toward developing an app, called AccessMap, that plans travel routes for people with limited mobility, such as those traveling in wheelchairs or on crutches.

Thanks to the efforts of the summer program, the team developed software to enable step-by-step routing for sidewalks. Based on this accomplishment, Google-maps style directions will soon be available. The goal of the DSSG program is to advance projects that show promise for positive societal impact. Numerous resources were provided during the summer, including assistance from data scientists, mentors and workspace. Following a competitive application process, only four projects were selected for the summer program.

“The fellows and mentors were essential to getting this project off the ground,” said Bolten. “We wouldn't have been able to do it without them.”

AccessMap took first place in Seattle’s annual Hack the Commute last April. Four students from various engineering disciplines developed a functional prototype in just 48 hours, which they presented to a panel of judges. While AccessMap was operational by the end of Hack the Commute, there were still challenges in translating available data into a workable format.

After learning that the AccessMap project was accepted into the 10-week DSSG program, Bolten spent two days per week as the project lead. He assisted and guided four fellows, Yun Hao, Amirhossein Amini, Vaishnavi Ravichandran and Andre Stephens, through a process to extend the functionality of AccessMap. By the end of the program, the fellows developed open source software that processes common open data sources, such as sidewalks, streets, curb ramp locations and elevation information, and produces an accessible routing database through a series of data cleaning, graph connection and annotation steps. The open source software shows promise for similar applications in other cities.

“AccessMap currently overlays information on a map and something similar to Google Maps driving directions is coming very soon in version two, now that we have the DSSG's results,” Bolten said. “Before AccessMap, there was no Google Maps at all for sidewalks. You’d have to follow streets and hope they had sidewalks, which is often not the case in residential areas of Seattle.”

The work was completed in partnership with Dr. Anat Caspi of the UW Taskar Center for Accessible Technology and members of the Seattle Department of Transportation.