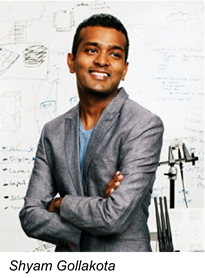 EE Adjunct and CSE Professor Shyam Gollakota was honored with the 2015 World Technology Award in Communications Technology. Out of 39 nominees, six of which were finalists, Gollakota received the top honor.

Gollakota leads the Networks and Mobile Systems Lab and works on various topics including computer networks, user interfaces and mobile health. He earned his M.S. and Ph.D. degrees from the Massachusetts Institute of Technology and his B.Tech. degree from IIT Madras.

Recent honors and awards that Gollakota has received include being appointed a CoMotion Presidential Innovation Fellow, receiving a 2015 NSF CAREER Award and Alfred Sloan Research Fellowship and being named to Forbes’ 30-under-30 list for his work in the energy industry.